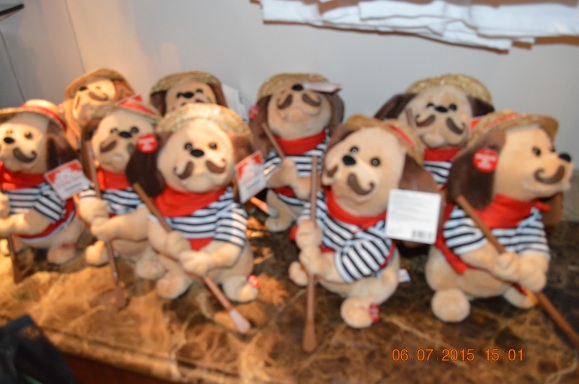 Floating beneath a blue sky with fluffy, painted-on clouds, we obeyed the gondolier, Pepe, when he told us to kiss as we passed under the arched bridge.

Customers boarding the next gondola smiled their amusement, but we were just part of the act at the Grand Canal and Shoppes at The Venetian and the connecting Palazzo hotel, situated on the north end of the Las Vegas Strip.

Our private gondola ride cost $80, but visitors can share a boat for less. As we stepped in, Pepe, a true showman, posed with us for two photos, which we later purchased for $65. The cashier threw in the 3D frame for “free.”

The temperature hit triple digits outside and the sky was blindingly sunny, but inside the climate-controlled Grand Canal Shoppes at The Venetian and Palazzo hotels, it could have been dusk.

The clouds are ceiling paintings, but the canal is real at the Venetian Hotel, Las Vegas, Nevada

Like so much in Vegas, things are not always what they seem.

Every so often Pepe broke into a familiar song like “That’s Amore” and ended with the theme song from “Lady and the Tramp.” His voice was quite good, so I asked what he did when he wasn’t singing on the Venetian’s Grand Canal.

“I work on cruise ships,” he said in charmingly accented English. “But my American wife doesn’t like me to travel far, so I work here, too.”

A FAMILY AFFAIR, EXCEPT FOR THE CASINOS

Nestled between the Wynn and Harrah’s – and just 20 minutes from McCarran International Airport – the five-star Italian-themed Venetian rises up 36 floors, with 38 diverse restaurants, 160 shops and several pools. The Azure Luxury Pool deck includes three pools, a hot tub and a poolside cafe.

A third pool deck, the Venetian, features spouting fountains and chaise lounge-side drink service, as well as the luxurious cabanas. The larger pool was filled with children the day we visited, but there’s also a smaller one.

In fact, The Venetian welcomes families, except in the casino.

The king suite we stayed in included a sunken living room with pullout sofa and three flat-screen TVs, the smaller one in the 150-square-foot bathroom. There’s even a phone near the toilet. The palatial bathroom includes a vanity. A lighted mirror has settings that change from day to night, so you can make up your face appropriately.

The remote-controlled Roman shades hold cachet for gadget lovers, and the in-suite dining is round the clock.

Rooms – all renovated over the past few years – start at $355 a night for the 650-square-foot king suite, which can run a little more depending on whether you have a desert or Strip view. Furnishings are pretty plush – you can sleep a long time in those Egyptian cotton sheets. The hotel’s Bella suites have two queen beds.

The Venetian’s penthouse suite spans the three top floors, with a master bedroom, multiple TVs, a fireplace, a second bedroom and two marble bathrooms with jetted tubs. And you don’t have to pay for snacks.

After you have gotten over the huge rooms, think about visiting the concierge desk for show tickets. “Lipshtick,” with comedians like Roseanne Barr, the musical “Rock of Ages,” the Sinatra-centric “Frank The Man. The Music” and Smokey Robinson’s Motown revue “Human Nature” are all on the bill at The Venetian this summer.

Although The Venetian includes shops, pools and shows, the food is definitely worth a mention. Try a New York strip steak at Wolfgang Puck’s Cut. The meat was tender and the service solid. We ended the meal with a banana cream pie with banana crème brûlée that was sweet but not too rich.

Other choices include Napa Valley chef Thomas Keller’s Bouchon cafe and restaurant, where our breakfast included a basket of four different artisanal breads that could only be baked in California.

For lunch one day, we stopped at db Brasserie on The Venetian’s restaurant row and experienced great service. Our appetizer of three cheeses – from sheep, cow and goat – was especially impressive. Although we didn’t have time to eat there, hotel staff recommended Morel’s French Steakhouse & Bistro.

Like other hotels on the Strip, The Venetian hosts dozens of conventions annually. Airlines like Southwest schedule 15-17 flights daily to Sin City. In fact, I sat next to the marketing person for Cars.com on our flight to Vegas. She recommended visiting the Fremont Street Experience, a light-show extravaganza near Las Vegas’ old downtown, where the Golden Nugget and other casinos are still in operation.

Despite its attractions, we had to leave The Venetian at some point, so we took a taxi to “Zarkana,” the new Cirque du Soleil show at the ARIA Resort & Casino. The costumes, colors and zany clowns reminded me of the French classic movie “King of Hearts,” in which the inmates are let out of the local asylum.

The acrobats performed with military precision and discipline as they flew through the air swinging from trapezes they then transferred to colleagues. Other Cirque du Soleil shows were sold out, including “O” and “Le Mystere.”

Tip: Do visit the concierge for discounts. The Cirque show we attended was 30 percent off that day because it started late, at 9:30 p.m. Celine, the concierge, warned us not to take the Vegas monorail tour, because you could see more riding a bus down the Strip.

If you go to Viator.com and search “Las Vegas,” you’ll find lots of outdoor activities. One can sign up for a helicopter tour of the Grand Canyon for $344 or a scooter tour of Red Rock Canyon for $249.

Las Vegas presents so many choices, but the Liberace Museum isn’t one anymore – it closed down a few years ago. At any rate, it’s one of those places where you can never get too much of a good thing.